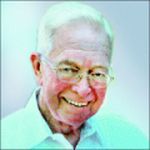 Irving Dewitt Sackett
(1925–2013)
(Src: Obituary)
Dr Irving Dewitt Sackett, son of Irving Dewitt Sackett and Elizabeth Peters, was born in Oil City, Venango County, PennsylvaniaG, on 7 August 1925.1,2 He died aged 87 in Springfield, Fairfax County, VirginiaG, on 17 July 20133,4,5 and was buried at Arlington National CemeteryG.6 He married on 10 May 1967, Youg Hui Park.1 Youg Hui was born in South KoreaG on 18 April 1947.6 She died aged 70 on 17 October 2017 and was buried at Arlington National CemeteryG.6
In 1930 Irving was living at 36 South 2nd Street, Indiana Borough, Indiana County, PennsylvaniaG, in the household of his parents Irving and Elizabeth, and was recorded in the census as Irving Sackett Jr, aged four years and nine months and born in Pennsylvania.7
Irving completed a World War II draft registration card on 9 August 1943. He was aged 18 and was at the University of Pittsburgh, Pennsylvania. He was living at 1056 West 25th Street, Erie, PennsylvaniaG, and his father at the same address was next of kin.8
Irving served in the US Army for 20 years from 8 March 1951, including service in Korea. He retired as a Lieutenant Colonel.3,9
Dr. Irving Dewitt Sackett, LTC, USA (Ret.)
Of Springfield, VA on July 17, 2013 at the age of 87. Beloved husband of Yong Hui Sackett for 46 years; devoted father of Lisa Sackett (Raul) Camacho; dear grandfather of Claire, Daniel and Audrey; and caring brother of Betty Sackett of Erie, PA. Irving was born in Oil City, PA in 1925. He graduated from the School of Veterinary Medicine at University of Pennsylvania in 1948. He proudly served his country in the United States Army for 20 years, retiring as a Lieutenant Colonel. He spent the next 23 years with the Department of Commerce. A service to celebrate Irving's life will be held on Saturday, July 27 at 11 a.m. at Sydenstricker United Methodist Church, Hooes Rd., Springfield. Arrangements by Demaine Funeral Home, Springfield. In lieu of flowers, the family requests donations in Irving's memory to Easter Seals.