How the Sackett family history came to be researched 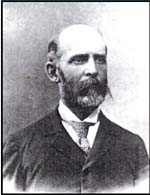 The first detailed research into the Sackett family was carried out by Charles H Weygant who published The Sacketts of America in 1907. His painstaking task occupied him for thirty-five years and the book records biographical details of all then known Sacketts of America from the arrival of Simon and John in 1631.

He recounts how his father-in-law told him about the colonist brothers, Simon and John, and of his being entrusted with a substantial collection of Sackett papers. From these, and through extensive correspondence with other family members, he pieced together what may be regarded as the definitive work on the American side of the family. He was, however, unsuccessful in discovering Simon's and John's English ancestry.

The complete text of The Sacketts of America is available online at Sackett Family Association historian Thurmon King's website.

Perhaps because of the unusual name, many Sackett family members have become interested in research. A surprising number have attempted to compile records although these mostly encompass no more than four or five generations of the direct branch derived from information still in the memories of the older members of the family.

Some have attempted more detailed work. From his researches in the 1960s of English records, Alfred Barrett Sackett was able to compile a chart going back to Henry Sackett (1710-1785) and detailing a considerable number of Henry's descendants. He also wrote a memoir, extracts of which are given in Alfred Barrett Sackett: A Memoir.

The first comprehensive study of the English Sacketts was carried out by Marion Sackett, of Reading, England, in the 1980s and 1990s. To facilitate her research work, Marion became an enthusiastic member of the Berkshire Family History Society. She identified, and established the relationships of, the vast majority of UK Sacketts.

Over the years, many members of the Sackett clan have begun research into the family history, but a major drawback has been the difficulty in making contact with other researchers. This resulted in many partial sets of records and a considerable duplication of effort.

All that changed in the mid-1990s as the development of the Internet reached a point where it became easy for researchers to make contact with each other and to share their work. Additionally, with the publication on the Internet of ever-increasing volumes of genealogical data, the medium itself became a source for family history research.

By 1995, a number of independent Sackett researchers had posted brief details of their genealogical interests to a surname search database on the Internet. Once we had "met" other researchers through contacts by email, the benefits of a computer discussion list were quickly realised.

The Sackett Family Discussion List was formed by Nancy Siders in February 1997, with eleven founder members. Membership stands now at more than a hundred, and is growing steadily.

In the short time that the list has been going, a mass of fascinating data has been circulated, with all members willingly sharing whatever family data they have.

A further major step was taken in 2003 with the formation, at a meeting in September of that year at Salt Lake City, of The Sackett Family Association, with the aims of focusing and coordinating members' research efforts and of preserving research data. More specifically, the objectives of the Association are: a) to research all historical and genealogical records worldwide relating to the Sackett family and their descendants; b) to publish and otherwise share findings amongst the membership; and c) to preserve Sackett data for posterity. Membership of the Association is open to anyone who is interested in the Sackett family history.

A Saga of Sacketts