Was this rifle made by Jacob Sackett?

A collector of western Pennsylvania longrifles has suggested that it bears the style of Jacob Sackett of Sagerstown, in Crawford County, PA. It will be recalled that we ran an article in the January 2005 TSFA Newsletter, "Jacob T. Sackett, Blacksmith, Gunsmith and Violin Maker" by William B. Moore, reprinted from the Newsletter of the Crawford County Historical Society.

I hope someone can help me identify this fine rifle. This came into my possession about a year ago when it was given to me by my father, Russell E. Harriger, who wrote a book in 1984 entitled “Longrifles of Pennsylvania: Clarion, Jefferson and Elk Counties.” During the years he spent researching the book, he frequented countless gun shows and yard sales, and while attending a small gun show in Indiana, PA, he came across this gun. He took it home, put it on a shelf in a back room, and promptly forgot about it for 30 years, until he gave it to me last year. As the gun is unsigned, I asked him if he could recall any information he might have received when he bought the gun, but at 86, he simply couldn't remember much more than the fact that he'd bought it in Indiana county.

I met with a notable collector of western Pennsylvania longrifles from Knox, PA, and he quickly suggested that it bore the style of Jacob Sackett of Sagerstown, in Crawford County, PA. I didn't know much more about Mr. Sackett until I came across your website online one day while attempting to find more information about him. I'm hoping someone else may have a passing familiarity with Mr. Sackett's rifles, and could help confirm whether or not this was made by him.

I have photographed all the angles to show the inlays and carving styles. The stock is curly maple, finished with a rich reddish mahogany stain that is very attractive. There is a heart inlay on the top of the wrist, and a very unique and stylish patchbox, which is uncommon on many western Pennsylvania guns, as most were much simpler. 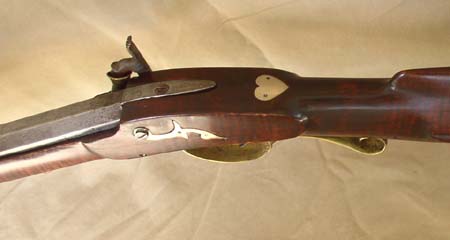 The barrel is a heavy, .40 caliber target barrel, and the lock is a back-lock style with the name Henry Parker Warranted stamped on it. I believe Parker was a Pittsburgh supplier of gun parts. The barrel is finished “in the white,” which means it is bare steel with just a touch of bluing, as opposed to the usual browned barrels.

It appears that something was stamped on the top of the barrel, possibly a name, but it has been either worn off, or intentionally sanded off, and is no longer legible. As the tang isn't a perfect fit, it's possible that the barrel is a replacement, which might explain why there's no identifying name on it. The other possibility is that the barrel has been refinished a few times, which might also remove any text that has been lightly engraved or lightly stamped.

This is a very attractive gun, and also an excellent target gun. I have shot it quite a few times, and it is a very sturdy and accurate gun that has been very well maintained. I have stopped shooting it recently, and will put it back on the wall for now. I hope someone who is familiar with Jacob Sackett's style might help identify this gun, or at the least eliminate him as a possible maker. Quite a few guns surviving from the late percussion era are unsigned, and it's a particular shame in this case, as the gun is quite unique and attractive.

TSFA Historian Thurmon King has written with a copy of the original article that appeared in the newsletter of the Crawford County Historical Society in 2003. The article included two pictures of a Jacob Sackett rifle. 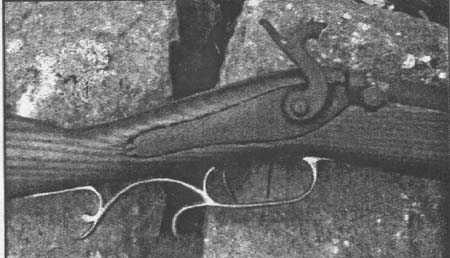 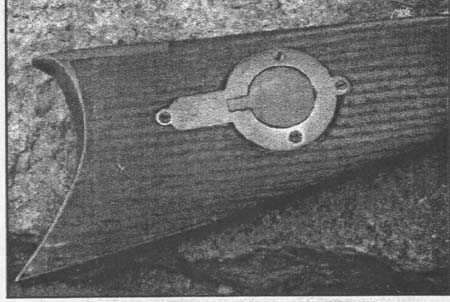 Download the Jacob Sackett article as a pdf file.