Kathryn Margaret Sackett
(1910–1985)
(Src: Patricia Harrah)
Kathryn Margaret Sackett, daughter of Frank Hutchins Sackett and Margaret Lois McNely, was born in Tallmadge, Summit County, OhioG, on 25 May 1910.1 She died aged 74 at Cuyahoga Falls, Summit CountyG, on 15 February 1985 and was buried at Tallmadge CemeteryG.1 She married in TallmadgeG on 6 April 1940, Clair Eugene Harrah.1 Clair was born in Alderson, Greenbrier County, West VirginiaG, on 3 January 1910.1 He died aged 70 in Akron, Summit CountyG, on 8 January 1980 and was buried at Tallmadge CemeteryG.1
In 1920 Kathryn was living in TallmadgeG in the household of her parents Frank and Margaret, and was recorded in the census as Katherine Sackett, aged nine and born in Ohio.2
In 1930 she was living at North East Road, TallmadgeG, in the household of her sister Rosalind and brother-in-law Stanley Rothrock, and was recorded as Kathrine M Sackett, aged 20.3
Invitations to Wedding in East
Invitations have been received in Weeping Water to the wedding of Miss Katharine Margaret Sackett, daughter of Mrs. Frank Hutchins Sackett, on Overlook Road, Silver Lake, Ohio, to Clair Eugene Harrah, Akron, Ohio. The wedding will take place at the Congregational church of Akron, Ohio, April 6, 1940. Miss Sackett is the daughter of the late Frank Sackett, who was a partner in the furniture store of Sackett Bros., in Weeping Water in the late nineties. Miss Sackett and her mother visited in Weeping Water at the Lloyd Wolcott home, a year ago, Mr. Harrah accompanying them at the time, and they made many friends while here.
Miss Sackett is a most charming young lady. She attended Shorter college at Rome, Georgia, and graduated at Mount Union college at Alliance, Ohio.

Miss Sackett, Mr. Harrah Wed In Tallmadge This Afternoon
Bouquets of mixed spring flowers and ferns were used as decorative notes in Congregational church in Tallmadge this afternoon when Miss Kathryn Margaret Sackett, daughter of Mrs. Frank Hutchins Sackett, Overlook rd., Silver Lake, became the bride of Clair Eugene Harrah at 2:30 o'clock. The Rev. Howard Barnes officiated at the open church ceremony.
The bride, escorted to the altar of the church by her brother-in-law, Stanley S. Rothrock, selected a quaint colonial gown of white mousseline de soie, made with square neckline and a slight train. Her veil was finger-tip length and, to complete the colonial theme, she carried a colonial bouquet of white roses. Mrs. Clyde Falor, jr., and. Miss Mary Irvln, as matron of honor and maid of honor, wore peach and blue chiffon, respectively. Their dresses were smocked at waist and neckline, and they carried spring flower arrangements of sweetheart roses and forget-me-nots. Miss Rosanne Rothrock, niece of the bride, wore green mousseline de soie. Her minute colonial bouquet matched those of the attendants. Earl Harrah, brother of the bridegroom, served as best man, and ushers were Lewis Harrah of Washington, D. C, another brother, and Franklin Sackett Barlow of Hudson.
Reception at Home
After the ceremony a reception for 100 guests was given at the Rothrock home. Calla lilies and white tapers formed the table decorations. Receiving with the bridal party was Mrs. Sackett, who was gowned in navy sheer with dusky pink trim and accessories. Her corsage was of pink roses and forget-me-nots. Mrs. Rothrock, sister of the bride, selected gray sheer with royal blue accessories and a corsage of iris.
For her going-away outfit Mrs. Harrah chose a light blue sheer dress with navy wool coat and navy accessories. The couple will return after a week's motor trip east to make its home temporarily at Silver Lake.
Out-of-town guests present for the wedding were Mr. and Mrs. Alan Rathbun of Fall River, Mass; Miss Emily Pierce of Cleveland and Mr. and Mrs. Howard Barnes, jr., of Painesville.
Mrs. Harrah attended Shroter college, Rome, Ga., and was graduated from Mt. Union college, Alliance, O. She is a member of Alpha Xi Delta women's fraternity. Mr. Harrah. son of the late Mr. and Mrs. James L. Harrah, is a member of the staff of Portage Country club. 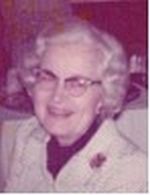