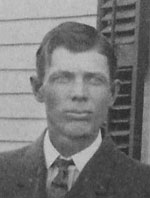 Children of James Curtis Sackett and Ora B Graham